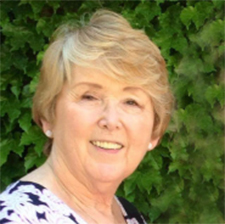 Read more about Pat’s condition
Ménière’s disease is of unknown cause and affects the inner ear, causing episodes in which the person feels as if they are spinning (vertigo), ringing in the ear (tinnitus) and fluctuating hearing loss – often with a progressive, ultimately permanent loss of hearing.

Pat’s health condition is invisible. She has Ménière’s disease (MD) resulting in a progressive hearing loss. Initially it was mild on one side. But by her mid-30s, Pat was profoundly deaf in her left ear – and determined to keep it hidden.

“I was in total denial because I’m not going to be like my father (who had a hearing loss),” she says. “My father was negative and rude. Not intentionally, but he would interrupt people because he would not hear them.”

This is a perfect example of a common outcome of having an invisible health condition and deciding to keep it hidden. “I was going to try harder,” Pat says. “I wouldn’t have all the negative labels, if you will, of what people who have a hearing loss are like.”

Eventually, when she was no longer able to cope using strategies such as making sure people were always on her right side, Pat began to acknowledge the hearing loss. Still, she refused the help of a hearing aid because of the stigma that would mean.

“One of the things I’ve learned over the years is that people think you’re dumb, or rude, or anti-social. They never think, ‘Well, maybe she has a hearing loss.’ So you are being put down for a different reason! People just assume that you’re very rude and standoffish, because they’ll come up to you and speak to you, and if they’re behind you or to your side where you don’t see them, they think you’re just ignoring them. Or that you’re stupid because your answer to a question makes no sense.”

Looking back, Pat remembers it getting to the point where she was struggling at work, in friendships, and avoiding going out. “It was all self-blame,” she says. “It was all a sense that I wasn’t trying hard enough. That if I were better at this, I wouldn’t have this problem. It was not, ‘Well, gee, people need to understand I’m struggling here.’ Because I didn’t feel that I could ask for help or understanding. I just thought people would negatively view me as inferior because I had a hearing loss. And it was up to me to do better. So while you’re busy trying to protect your self-esteem, you’re being put down for a different reason.

“People think you’re dumb, or rude, or anti-social. They never think, ‘Well, maybe she has a hearing loss.”

“What people don’t understand it’s a sense of not hearing, not receiving the sound. It’s a misunderstanding of what the instruction or request is. So if you think you’ve understood and the request is, ‘Take this paper to Mr. Jones,’ and you thought it was ‘Mr. Bones,’ they’ll say, ‘Well, why didn’t you tell me you didn’t know?’ Well, I thought I did. And people don’t get that. People don’t understand, so they think it’s an intellectual failure.”

Unable to interact with others in a “normal” way led communication partners to jump to the conclusion that Pat was rude, standoffish, not smart, and all the other assumptions. Because she was not behaving in a way people expect, those around her needed to make some sense of this and so they jumped to negative conclusions.

Pat, like many losing their hearing, made adjustments until the adjustments just didn’t work anymore. She described her “a-ha moment” one morning when her husband said something to her as he was getting up. She was still in bed and responded, “Hang on a second, let me put my glasses on.”

He looked at her, puzzled since she normally wears contact lenses. “I suddenly realized because I can’t see your lips, I’m not hearing as much as I think I’m hearing,” Pat said. Without realizing it, she had become very adept at lip reading.

In the support group Pat helped start (a chapter of the Hearing Loss Association of America), she works as a hearing health advocate to help people better manage life with this invisible disability. There is also a lot of discussion regarding how much prejudice and stigma and just total discrimination there is in the workplace.

“We spend a lot of time talking about, ‘Should I disclose or not? When do I tell my boss I have a hearing loss?’” Pat says. “Because if you tend to say it upfront and two candidates are equal, they will probably choose the one that doesn’t have some sort of physical limitation.”

Pat now takes a different approach when interacting with the hearing world. “What I have learned slowly is communication is a two-way street,” she says. “People have a responsibility to make sure I understand what they’re saying. It’s not just me.”

Pat interacts with the world very differently now and clearly states what her needs are. “And the more I do that, the better my life is,” she says. “The better my relationships are. The better I function.

“When I travel on an airplane, I would not have dreamed of calling attention to my hearing loss previously. I would just bury my face in a book. Now I ask to pre-board. I tell the flight attendant as I’m coming on, ‘I have a hearing loss. In order to get my attention you’re going to have to do this, this, and this.’ It makes it so much better in the world when I speak up for myself.”

She also thinks the world would be better “if society didn’t have a negative impression, if we taught people communication adjustments or communication skills with people who communicate differently or, whatever the difference is, if we could educate people to communicate with the person.”