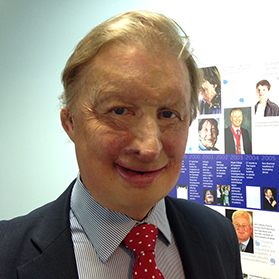 Read more about James’s condition
Facial disfigurement can be caused by a disease, a birth defect, or a wound. Cleft palate, cleft lip, burns, cuts, and facial discoloration are common facial disfigurements. Changing Faces supports people with disfigurements (face and body), and the causes of those include birth conditions like cleft lip and palate, scarring from accidents, violence or surgery, cancer and its treatment, eye conditions, facial paralysis after Bell’s palsy or stroke, and skin conditions like acne, vitiligo and psoriasis.

James’s story begins at age 18 with a new driver’s license.

“I thought I was a fairly cool driver but then I managed to turn over a Land Rover, and it blew up,” he says. “I was trapped inside it with four others and they all got out. I was the last one out.”

“Having been a completely happy-go-lucky guy who traded on his looks, I suddenly found myself in a burn unit surrounded by a lot of marginalized people. These people were not happy with what they’d done to themselves – and I was not particularly happy with myself either.”

It took a few months before James looked in a mirror and saw for himself what he’d already seen in people’s eyes. His face was “severely hammered” – it took five years of surgeries to get to the face he has today.

During that time, James went to university and tried to figure out how he was going to cope with life. Five years after his accident he remembers going to see his surgeon who asked, “So what are we going to do next?”

James had his answer ready: “Actually, I really need to try to go and be a citizen now,” he recalls saying. “You’ve taken me from shock and horror to not bad, but I know I’m always going to look different. I really just don’t want to be ‘a patient’ anymore. That was an important moment.” 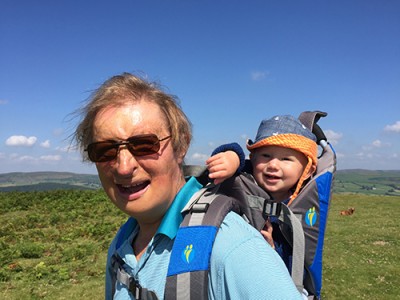 A return to the scene of the accident helped James understand that it wasn’t such a stupid thing that he had done, and his self-blame decreased, at least in that area.

“I think much, much more difficult was the stigma – the stigma around tarnished looks,” he says. “It was about the disfigurement that I had acquired, that I knew in my deepest psyche was associated with – in society’s eyes and in my own – disreputable, distasteful, evil, unpleasant, someone not to be with.”

James also felt frustrated with his medics and health care teams. “Nobody was helping equip me for that return to the public gaze, and that’s what I was furious about,” he says. The surgeons patched me up superbly, but actually what I needed help with was getting out there and learning how to deal with all the little things that happen to me outside their gaze.”

For instance, no one taught James how to deal with the reactions of people who meet someone with a facial disfigurement.

“Having been a completely happy-go-lucky guy who traded on his looks, I suddenly found myself in a burn unit surrounded by a lot of marginalized people. These people were not happy with what they’d done to themselves – and I was not particularly happy with myself either.”

“They tend to shy away from making eye contact, and if you’re not careful, you end up never making eye contact with anybody,” he says. “There was a moment during my incarceration in hospital when everybody that came to see me wore hospital masks. Including some really stunning young student nurses. I realized quite early on that I’d quite like to see what’s behind the mask. I can still flirt with you. I could use my eyes. And that’s a really important lesson, I think.”

The next big turning point was meeting his wife.

“I had really mastered friendship skills, I had mastered being in the world with a number of ways of presenting myself,” he says. “The stigma was no longer sticking on me. I knew I was through that, but a relationship is on a different level – you’re never quite sure whether you’re going to make it. Then, seven years after the accident, I met my wife and realized whatever happened to me has actually enhanced me, not belittled me in any way, and I could fall in love. ”

Now, James has a few tips for people with facial disfigurements. “Don’t take what the surgeons say as gospel,” he says. “Eye contact is essential – use it strongly – and be bold.”

Changing Faces, the charitable organization he founded in 1992, encourages people to be bold. It teaches self-management and the development and practice of different strategies for dealing with situations, depending on how the stigmatized person is feeling at the time of the interaction.

“I’m a huge believer that self-help, and in particular social skills training, is really the key to help people free themselves from stigma,” he says.

Freeing people from stigma – through his work at Changing Faces and in other forms of advocacy – means today James is entitled to use the letters OBE behind his name: the Queens Order of the British Empire, bestowed upon him by the Queen of England in 2002.

He certainly has accomplished his goal “to go out and try to be a citizen now.”

“But I’m not finished yet!”