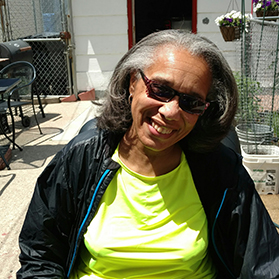 Clarinda was just 15 when a youth worker walked into the YMCA and shot her. Nothing personal, it was just his initiation into a gang. He had to show he was unafraid to use a gun or to go to jail.

“The bullet (a dumdum bullet) went through my spine and then it blew up in my digestive system,” she says. “The doctor gave my parents zero chance that I would survive. That was almost 50 year ago.”

Clarinda credits an incredibly supportive social network in overcoming what is often a discriminatory environment. From day one, her family was always there. “My mother and father did not miss a day,” she says. “My grandmother would get up every morning and cook me breakfast, and my father would bring the breakfast to the rehab hospital on his way to work.” 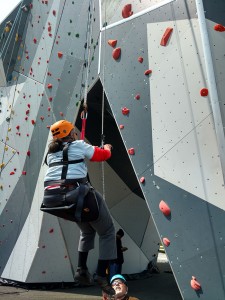 This commitment continued once she left the hospital. “My father made the decision that we had always done everything as a family – I have two younger sisters – and we were not going to stop now,” she says. “So we didn’t go roller skating, but we went to the zoo. My father was a master of putting things together. He built this bicycle for two so we could go bicycling. So we still did things as a family.”

The hospital’s director of recreational therapy worked with Clarinda to develop ways to overcome obstacles found in her social and physical environment. “He was always trying to find ways to do stuff,” she says. “I used to enjoy bowling. ‘Why can’t you bowl?,’ he asked. ‘Let’s see if we can figure out a way to do it.’ So to this day I still bowl. I’ll push the chair up to the line and lean over and then I can throw the ball.”

Clarinda credits her mother with developing her resilience to challenges. “I call her the warden,” she says. “My father, I can wrap him around my finger – but mother was like, ‘Oh, no.’ Once she found out I could do something that was it, she stopped doing it. If I learned how to put on my socks, she might sit there and watch me struggle to get them on, but she wouldn’t do it anymore.”

Clarinda’s parents were determined she was going to finish high school. They went to the Chicago Board of Education, which wanted to send her to a school for disabled individuals instead of returning to the school where all her friends were. “It was the principal who felt that I was going to be a hazard,” she says. “I might hurt someone or I might get hurt.”

“My father made the decision that we had always done everything as a family – I have two younger sisters – and we were not going to stop now. So we didn’t go roller skating, but we went to the zoo. My father was a master of putting things together. He built this bicycle for two so we could go bicycling. So we still did things as a family.”

But the principal couldn’t buck the board’s permission to allow her to return. So he found another way to discourage her family. “’You can’t come back to day school,’ he said,” Clarinda recalls. “‘You can come to night school, but we don’t want you in a classroom with the other students. You can come and sit in the library.’”

Friends were also a part of who she is today – just not the original ones she had counted on. “Buses in Chicago are not accessible,” Clarinda says. “If they were going to the park, how would I get to a park? All the things that we did prior to the disability they were still able to do, but I wasn’t. When I look back, I don’t think we knew how to approach each other. I had not developed the skill.”

Clarinda was allowed to leave the rehab hospital every weekend. Her mother encouraged young people to come see her, with little luck. Then one boy said sure. He’d be there every weekend. “People thought for years we were getting married,” Clarinda says. “One of us probably would have been dead if we’d married, but he was there and was really encouraging.”

Clarinda says this boy “still harasses my life today.” But it’s paid off, inspiring her to follow him to college.

Others befriended her too, and they had a car. “I think they helped me accept who I was by the fact that they were willing to take me out in public,” Clarinda says. “Because there were people who told my parents that I should be put in an institution.”

Although family, friends, and rehab specialists all had a role, Clarinda’s life accomplishments show these helpers were starting with one tough cookie. The girl whose grades were horrible, who didn’t want to finish high school, achieved a master’s degree. This led her to a career recruiting underprivileged students to medical school, and then placing them as professionals in areas with limited access to health care to repay their educational debt.

All through life, Clarinda has fought for people with health challenges. She took part in demonstrations to make Chicago’s public transportation accessible. She adopted two infants as a single parent “because I wanted to mother,” she says, “and because they said disabled people couldn’t adopt.”

By the way, care to guess who was one of the first to climb the newly opened climbing wall in Chicago’s Maggie Daley Park?